A Fairy Tale of Enterprise and Booty on the Southern Border 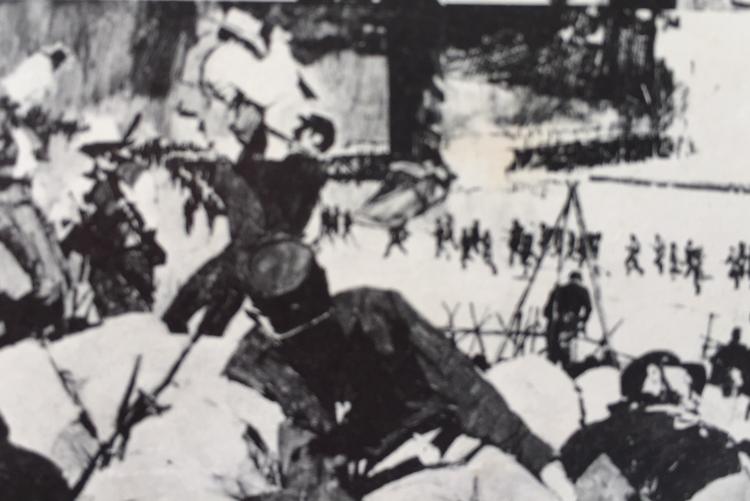 Battle line in the desert

This is a fairy tale of the Southern Borderlands, but as Scheherazade might say there is much that can be learnt from these never-ending stories of interesting deeds and powerful metaphor.

There was a time when the southern borderland was an open space of hot desert and craggy mountain, through which Gringos, Mexicanos, Navajo and Comanche could freely roam. Law and government were uncertain in that region, minerals and animals were plentiful, and enterprise was ambitious and violent. Some men sought reward and bounty through unrestricted claim and firearm. And the paths of three such treasure-seekers by happenstance crossed in a strange and awful venture to capture the gold bullion of the army of the Rebel Government, in the war that raged across the whole Western Lands at that time.

The first of the three was tall and thin and of fearsome aspect. He agreed to kill by arrangement of private treaty, and so made his fortune. Others called him Angel Eyes, for his narrow-eyed, steady and deadly gaze as he prepared to kill.

The second was a lone ranger of different aspect – a Gringo, tall, and of fair appearance, but cloaked in a poncho of the Mexicanos. He gave no name, but others called him Blondie, for his light skin and hair. He hunted fugitives from justice to earn government bounty, and so made his fortune, steadfast in his skill with firearm and rope.

The third was different again, a Mexicano, rough and loud but nimble, a bandido and no more, seeking his fortune through seizure, violence and robbery, a pirate of the desert, though his brother was a priest and benefactor. Others called him Tuco, for he was a simple man and that was his given name.

It happened that these three, their paths converging, stumbled on a secret in the desert, a tale told by a dying soldier of the Rebel Confederate army. In return for a last draught of water, he revealed the place of a buried chest of gold, in a desert burial ground, sufficient to make the final fortune of any roving entrepreneur bold enough to make the journey in the war-torn lands of Nuevo Mexico.

And so the three started their strange and dangerous venture. It was a tale of uncertain and unnatural alliance, of deception and betrayal, of violent encounter, of torture and confinement, of cunning and military stratagem. They crossed the battle lines of the Rebel Confederate and Northern Yankee armies, and arrived finally, all three together, at Sad Hill, the vast burial ground in the arid desert. There they agreed that only one would take all, and that would be decided by duel of firearms, determined by the chime of a timepiece. In this contest, Blondie dispatched Angel Eyes and disarmed Tuco. By a final trick, he bound Tuco with ropes and left him shouting and struggling in the desert with half of the gold, retrieved now from an unmarked grave. With half the booty in his saddlebag, he rode his horse into the distance.

Of the fate of Blondie and Tuco, nothing is told.

Aficionados of cinema and American culture will quickly recognise the narrative of the 1966 film The Good, The Bad and the Ugly, directed by Sergio Leone and with actors Clint Eastwood, Lee Van Cleef and Eli Wallach in the three leading roles. The film provokes some reflection on the motivation for economic crime. The three protagonist are psychologically very different – a psychopathic killer; a lone ranger, capable of violence yet with a sense of justice; and a chaotic and amoral rogue who survives by violent robbery. All three appear to thrive on the ‘day job’ – hired killing, bounty hunting, and daylight robbery. Yet they risk life and limb for a huge economic prize which could settle them for life – apparently. Should we understand this plan as a rational decision ? Hardly. The risks and personal suffering are large enough to outweigh an unlikely eventual gain. Nor is it easy to believe that any of these three would be content to retire to a comfortable and peaceful afterlife, in the way of Carlo Brigante (Carlito’s Way, directed by Brian de Palma, 1993) or Outlaw Pete (Bruce Springsteen, 2014). For the contract killer, the bounty hunter, the bandit, the motive lies in the excitement of the chase, the lust for adventure and violence, the satisfaction of trick and deceit. The hunt for booty is an end in itself. In the world of psychology and criminology, these are irrational actors. Leone’s film serves nicely to explode the rational actor theory of economic crime, and satisfy the irrational watching world with the dramatisation of the irrational, and the elevation of the tawdry into the epic.